Transitional Outfits from Summer to Fall! Screen Time and Your Family. Oh Yeah, and Donuts. Doooonuts.

This is a big week for me. I'll blog about it another day though.  Today, I want to share with you some things that I've found interesting and thought you miiiiight too!

How do you deal with "transitional" weather? That's when it it's not quite one season, and not quite another.  Here in Michigan, there were days last week that both had highs in the 90's and in the 60's! It's very difficult to keep up with.

My solution - outfits that can morph and do double duty with any season.
If you know me, you know that I can be a total dork who wears purple neoprene and rubber boots every single day for six months straight. When I find a piece of clothing that I love, I tend to over do it. Way over do it.

One of these favorites was a floral "tea dress" from Boden that is almost perfect! I bought it last fall, liked it so much that I bought a second, and then proceeded to wear them straight through fall, winter, spring and summer! I have a feeling, a strong feeling, that this is probably ill-advised and possibly a fashion faux pas to wear a summer style tea dress in the dead of winter. In Michigan.  BUT, I love it so much, and paired the dress with a matching cardigan and tights, which was warm and comfortable.

Here is my latest incarnation of a warm weather dress heading into fall. The dress, tights and boots are all from last year, only the sweater and bag are new. Double duty outfit, SCORE! Already owning 80% of an outfit, SCORE SCORE!

I actually like the challenge of transitional dressing. It's not so bad if you just put a little thought into it.

Have you heard of the book The Big Disconnect: Protecting Childhood and Family Relationships in a Digital Age by Catherine Steiner-Adair ?

I learned about Catherine Steiner-Adair and her work while listening to podcasts of the radio show "The Parent's Journal with Bobbi Conner".  Great show by the way, they cover so many interesting and current topics in parenting today. Things that make you think! You can find the Steiner-Adair interview on iTunes.

The book came back across my radar when Huffington Post published the following article, which includes a video interview with Catherine Steiner-Adair.....


Basically, by providing our babies and children screens, we're actually re-wiring their brains, in not-so-great ways.  Children are spending less time on deep, imagination centered play and they're not learning how to self-sooth and self-entertain in times of boredom. That instant gratification that screen give is not only addictive, but it changes us. Additionally, PARENTS are spending more time on their smartphones, tablets and computers and less time engaging with their kids. It's everybody's problem.

I will be the first to admit that I am far far from perfect in all of this. For one thing....Duh.....I write a blog, so I am using screens a lot,  but I'm also way too attached to my phone and all of the little things that it does. I was also, now regrettably, one of those Moms who loved Baby Einstein. (Well , I still dig it, but now I wish I would have waited). Somebody gifted us the whole box set, so you can guess how much Baby Einstein we watched.  Noah was a typical kid who spent his toddler and preschool years watching shows on Sprout and PBS. When he was four a classmate told him about the online game "Club Penguin", with which he was immediately hooked! Our parents gifted Noah a Wii at five.

If I could do it all over again, the biggest mistake that we made was allowing Noah to start playing on the computer at four, and the Wii and V-smile games at age five. At such a young age, he developed a love for fast moving, instant gratification screens. Quickly it's all that he wanted to do. We didn't fully grasp what a huge focus this was becoming for Noah until he was completely hooked.

It's not that these games are so inherently bad, it's what they can do to a young, developing brain. And just like the Huffington Post article says, a child's constant desire to be on screens rather than out at the park or playing a board game together..... that can really disrupt the harmony of a family!

The silver lining....... while it's difficult to break screen time habits, it's not impossible! In fact, it can actually be fun! Remember in July when I wrote about my new commitment to "Simplicity Parenting" and "slow Living"? Ever since then, we've slooooowly been reducing screen time for Noah and replacing it with opportunities for imaginative, creative play. It's going great!

Small changes were made in August, like simplifying our environment....less clutter in Noah's room. This consisted mostly of the toys neatly stored and out of sight, and a changing cast of curated "exploration baskets" that I fill with books and toys that Noah hasn't seen in a while. It works! It really works! The archeology set that has not seen the light of day in a year, the crazy colors markers from the bottom of the desk..... it gets played with now....instead of screens!

When school rolled around, Jon and I came up with what we feel are pretty fair, pretty moderate screen time rules. We made up a colorful, fun poster for Noah to explain the rules, and used the opportunity to also explain homework and school year bedtime and morning routines. It's not meant to be rigid and authoritarian, quite the opposite, but I've found that a little routine and expectation goes a long way.

We made sure that the poster, explaining the new expectations used a lot of positive wording, like:
Good listening + Good Attitude = Good Things! These things, or "rewards" included a dip into the surprise grab bag, a trip to a playground or another place Noah wants to go, and the occasional imagination or creativity toy that Noah might want to work towards.

Jon and I presented the poster and went over the rules one evening together. We made sure to have time to discuss and answer any questions. I noticed that we rarely buy Noah toys anymore, especially when it isn't his birthday or a holiday. So, to sweeten this new "Slow Living Routine" even more, we selected two new toys that would get Noah started on more creative, non-screen play....... 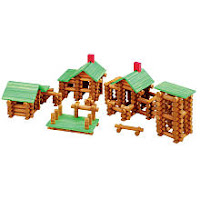 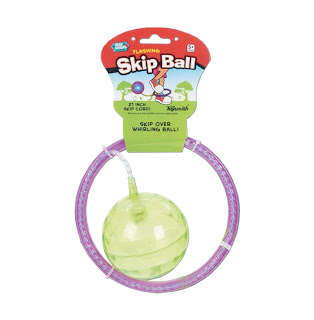 So far, everything has gone great! The rules include no screens at all in the morning before school. Not only has Noah not complained about this, but he is in a better morning mood, we're not running late anymore, AND he happily reads books over breakfast!

Also, during the week, the rule is no screens until homework is finished, and then one hour a day of computers or video games there after, and thirty minutes of TV.
Some might not see the point in talking about reducing screens and then allowing an hour and a half of screens each day. It's my feeling though, that the key is moderation in everything! School is stressful and tough, so if Noah's homework and any other responsibilities are done, I think he deserves a little fun time to un-wind. (I hope to get it down to an hour a day, but we'll see....)

The best part....often times he's been CHOOSING things like Legos and art and Hot Wheels play over the computer now! And, Noah has been great at monitoring his screen time, and turning everything off when his time is up.

I really mean it, there is a shift going on.
We'll re-evaluate things soon. I might introduce a regular family game night, or a weekly new playground adventure. I also love that Noah's class does D.E.A.R. Drop everything and read! We might have our own D.E.A. R. too.
The possibilities are endless.

So, if you are concerned about the amount of time that your family spends in front of screens, I highly recommend both The Big Disconnect and Simplicity Parenting. They're great reads and very helpful!

Here is just a silly picture of Noah and I that I like. (This was before I started "cramming" for my physical. Lol.) It was after Priya died and I was so sad and distraught, that I saw a bag of mini donuts at the grocery store and bought them! If you know me, you know that I try not to bring any real junk food into the house or else I'll EAT IT! So, this was a super crazy move for me, and of course OMG they were delicious and of course I ATE TOO MANY MINI-DONUTS!!!!
But........*blush*..... it was totally worth it. ;)
(Noah on some sugar craze!) 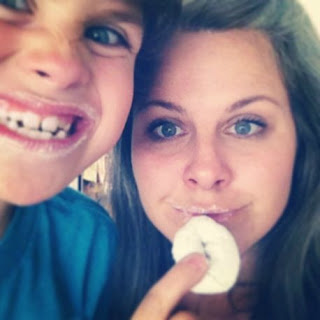 girl,I live in Spanx..don't be embarrassed!I just discovered Boden..cutest.clothes.ever.It's hard for me to order clothing online though:(

Yeah, I'm going to sing the praises of Spanx from the rooftops!!!!!!!
LOL. ;)
Actually, they seriously are the best tights around. I've tried so many. The Spanx are the nicest. Yay!

It's hard for me to order online too. I never know what is going to fit or not. I end up sending things back a lot of the time. I like places that offer free shipping both ways! ASOS is one of them.

I loved the 'Simplicity Parenting' book too. We've de-cluttered throughout the house (I know!!!!) and my girls (2 and 4 years old) only have an hour of TV a day and 1 hour playing on Daddy's iPad on Sunday afternoons. This was geared towards my husband and I trying to reclaim our before-kids ritual of reading a newspaper on Sunday afternoons... but that hasn't happened yet! lol However, by simplifying things, the girls are calmer and far better playing together or on their own. It's a delight. Love the blog, Lauren. :0) x x

I read the 'Simplicity Parenting' book this summer and loved it! We've de-cluttered the whole house since (I know!!!) and my girls (2 and 4 years old) only watch 1 hour of TV a day and have 1 hour on Daddy's iPad on Sunday afternoons. This was geared towards my husband and I reclaiming our before-kids ritual of reading the Sunday papers but that hasn't happened yet! lol However, since changing routines, the girls are calmer and play so much better on their own and together. It's a delight! Love the blog, Lauren. :0) x

So nice to meet you. Thank you for stopping by. Ah! I know, isn't is a wonderful book!? I really do love it. Doesn't it feel magic, how much those simple steps change the children's behavior?
I completely understand the attempts to read the papers. Hang in there! As Noah became a bit older, it was easier. :)
Thank you for your sweet comment. I will write more on SP in the future!
Take Care,
Lauren
xoxoxo