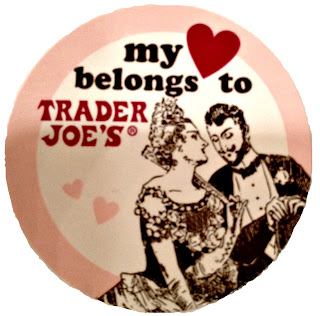 Day two, and the Trader Joe's Challenge is going strong! Tonight I made Shakshuka and homemade hummus for dinner.

Tonight felt like endless cooking. Not because the shakshuka was difficult to make, or the hummus for that matter, they weren't! Only because I had to make TWO dinners tonight. Noah had a sweet, little friend over for a playdate. His buddy seems to be a great and adventurous eater. Even exalting his love for tofu and pickled cactus on the ride how from school. I knew though, that Noah would never touch the shakshuka with a ten-foot stick. So I took the path of least resistance and served the boys something that I knew they would like... pasta with Parmesan cheese. Except for Noah. No cheese. Go figure.

Once their meal was cooked, eaten and cleaned up, I went onto ours. Honestly, until recently, when I heard it mentioned twice, I had no idea what shakshuka was. No idea whatsoever. Shakshuka is of middle eastern origins. I have a feeling that many middle eastern countries have their own version shakshuka and unique spellings.

I loved that this dish was one-pot cooking. Everything was made in the pan that Jon's holding. You sautee' a ton of garlic and onions in olive oil, and then add the spices....cumin...paprika, thyme and basil. A chopped red bell paper is thrown in, stewed tomatoes too. Everything simmers for 30-40 minutes or longer. When you're ready to eat, the last thing to do is crack some eggs gently on top, cover with foil, and put into an over at 350 degrees. And there you have it!

One great thing about shakshuka is that you don't have to worry too much about it being over-cooked. Well, within reason, before adding the eggs. Jon was tied up at work and ending up coming home later than his usual time. I just let the shakshuka simmer until he arrived home, and it was still delicious. 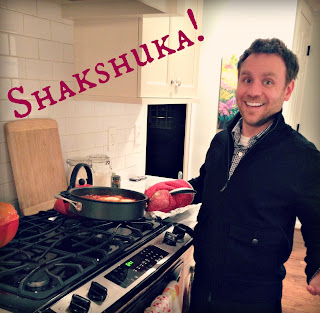 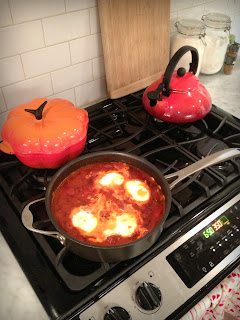 If I had more time, I would have made a nice salad and some fruit to go along with this dish, but today was busy, so I didn't have much time. What I did make though, was some SUPER easy hummus. I couldn't believe how simple it was. You just throw some garbanzo beans, olive oil, lemon juice, tahini, cumin, garlic and salt in a blender and...blend! That's all there is to it! I've made hummus in the past, but this time it just seemed easier.

The hummus was good, but the recipe recommended letting it sit for several hours. I think that gives the ingredients a chance to meld their flavors together. I can't wait to try the hummus again tomorrow.

We really don't eat too fancy around here most of the time. This was it tonight, just simple. I had some leftover peas from the boys' meal, and I toasted a bit of gluten-free bread to dip in the hummus, as we were out of pita. 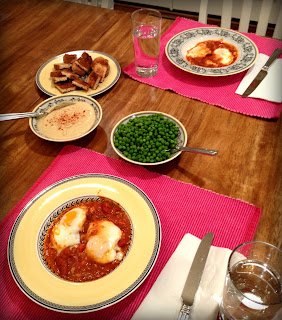 Ok! So that's day two! I'm not sure what I'll go for tomorrow, but I'll let ya know. If you have any good Trader Joe's recipes, or general recipes that you would enjoy sharing, please feel free to chime in!

I have never heard of that dish but am glad I have now! It sounds delicious. So neat that there are eggs cooked on top at the end.

I love hummus but have found that I never use up all the tahini I buy, so last year I figured out an alternative that left no wasted ingredients and was delicious ... We're talking eat it out of the bowl with a spoon delicious! I replaced the tahini with peanut butter and sesame oil. We use both those things regularly, so no jars of anything are left hiding at the back of the fridge!

Oh my gosh, your peanut butter and sesame oil tahini replacement is pure genius! What a great idea!

I know, tahini can be expensive and difficult to use up.

Wow, learned something new. Thanks Loulou! :)